It's Not Only About the Cats

"Honest disagreement is often a good sign of progress" —Gandhi 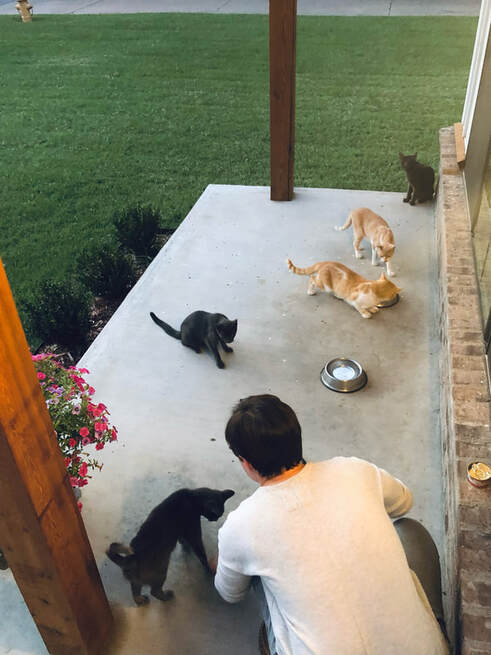 Caregiver breaking out the good stuff: canned food and some high-quality H2O.
If there is one thing T-Town TNR cares about as much as community cats, it's community humans.  We are human, after all, and it is people who provide the requests for assistance that we act upon.  The issues can take many forms.  Most people enjoy the company of cats, but maybe not fifty of them.  Some people have neutral feelings but want to alleviate visible animal suffering.  A few consider felines a nuisance and would prefer that they just go away.  Sentiments differ, but almost everyone agrees that when it comes to community cats, less is better.
At T-Town TNR we trap, spay/neuter, vaccinate, and return unowned felines, of course.  But if you think that's all, you are missing a big part of the picture, in particular, the short-term impact that targeted TNR can have on a population of animals and, as importantly, the people that live with them.  That was certainly the case of a recent project.

This particular group of cats or their predecessors had been in the neighborhood for some time.  They were so familiar that they had been given names.  The animals were spread along a two-block strip, and there were kittens, lots of them.  One litter was born in the backyard of a homeowner who didn't want them there, and another resident had legitimate personal concerns about the animals.  Most people, however, liked having them around--they were part of the neighborhood, after all-- but there were far too many.

Four T-Town TNR trappers worked the first night and three the next, using twenty traps spread over five locations.  The lead, Laura, spent six additional days catching the last two kittens.  It took every technique and piece of equipment she had, including a fish net, but she got them, using a meowing sibling in a covered carrier to attract the last.  Genius!  When a neighbor commented on her dedication, she replied, "You didn't think I was just going to  leave a kitten out here, did you?"

The neighborhood pitched in, regardless of individual feelings toward the cats, and was a critical part of our success.  People provided a history of feline behavior, communicated to trappers about animal sightings and distribution, monitored activity on porch cameras, helped watch traps, and carried animals to vehicles.  One baked cookies.  Neighbors conversed on street corners and sidewalks to people with whom they rarely spoke.  And it rained; no, check that, it poured;  the kind of deluge where every inch gets wet, including the soles of your socks.  It was cold and miserable but hungry cats don't have the luxury of waiting for the weather, so we trapped.

Thirty-four cats were caught that week, including twenty kittens.  Fourteen adults were processed and returned, and one venerable old male, Goliath, was treated for a severe eye infection.  It was nearly a clean sweep, but a single wily female remains, unbowed and intact.  Eventually she will be caught.  You can bet the ranch on it because the lead trapper won't stop until she is.
Goliath before treatment
His absentee parenting days are over. 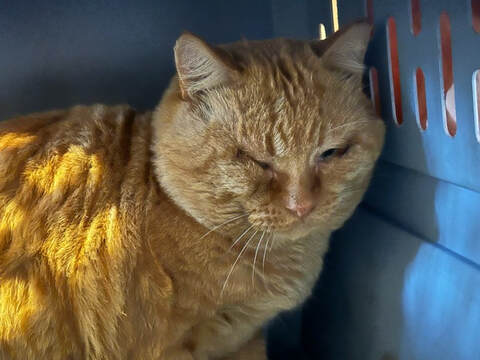 The kittens were young enough to be socialized so they never went back to the neighborhood.   They are currently in foster care or up for adoption through the kindness of Tiny Paws in Stillwater and the Tulsa SPCA.  You see, T-Town TNR does not have a foster or adoption program.  It's beyond our core mission and out of reach of our resources.  But tell one of us that there is no hope for an adoptable kitten, and they'll chuckle and go prove you wrong. Team members work out those details at their own expense with a fair amount of negotiation, bartering, and a little groveling.  It's an added strain, but you didn't think we were just going to leave a kitten out there did you?

Sadly, two kittens from one litter were so sick that they died in veterinarian care the following day.  The mom was physically spent from the rigors of raising young and couldn't provide adequate nutrition.  You can see them below enjoying the last sunny day of their brief lives.  Laura second-guessed herself, wondering if they would have rather spent their remaining hours at home with siblings rather than at the animal hospital, terrified and alone.  Losing a kitten drives us crazy; what if we had gotten there a week earlier...or a day? 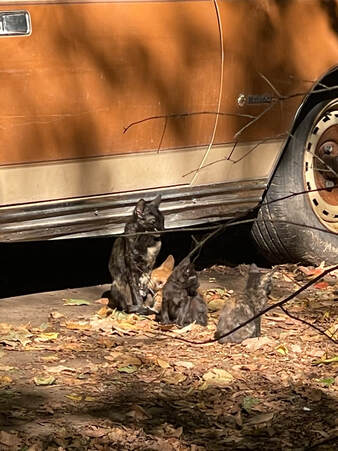 And the neighborhood?  It is still there with the people, community cats, and varied opinions thereof, but that week, a united effort was formed from those differences to reach a common goal.  These folks will continue to be a critical element of that success, communicating with each other and us, keeping an eye out for new cats in need of TNR, or injured animals requiring medical assistance.  That's what managed cat communities are all about.

The long-term efficacy of TNR and subsequent oversight of outdoor cat populations has been shown by decades of research to be the best current ethical solution to community cat overpopulation.  Still, it's debated.  But on those eight October days, in that place, we produced an instant population reduction of over half.  It was accomplished without euthanizing a single animal, burdening shelters, or spending one penny of taxpayer money, never mind the long-term population-stabilizing effect of sterilizing the adults.  And it made the human community happy, cat-lovers and haters alike.  It's hard to disagree with that.

Those trappers and others like them are off to other projects with similar problems experienced by similar people.  T-Town TNR processed 1,439 animals last year and 8,000 since our organization began seven years ago with two friends and a trap.  We have responded to 2,500 requests from Tulsa citizens to date, but there is still so much work to be done.  We have the desire but limited resources, and the reproductive clock is ticking.

You can help!  The future of a community cat's life can be changed forever for about $75, the price of a nice dinner.  We'll provide the tip.  The cats will never thank you because they're funny that way, but we sure will, and so will members of the Tulsa community.

The all-volunteer staff at T-Town TNR are unrepentant cat lovers: long hair, short hair, cross-eyed, stubby-tailed, it's of little consequence.  We love happy, healthy cats living in their outdoor homes, unburdened by cyclic reproductive stress, and graced with a tipped ear.  We love purring fat-bellied kittens indoors, not crossing busy streets in search of food or falling victim to predation and disease.

And we love the people we work with and the human communities we help because, although some long to become a cat in another life, alas, in this one, we are only human.